So this week I was asked to speak in sacrament meeting, and the thoughts that have been most prevalent on my mind came out through the talk, so this is really what I wanted to share this week, plus some pictures of the week. Enjoy.

“Those who have read [the Book of Mormon] prayerfully, be they rich or poor, learned or unlearned, have grown under its power. … Without reservation I promise you that if you will prayerfully read the Book of Mormon, regardless of how many times you previously have read it, there will come into your hearts … the Spirit of the Lord. There will come a strengthened resolution to walk in obedience to his commandments, and there will come a stronger testimony of the living reality of the Son of God”

That was by President Gordon B. Hinckley. Today I have been asked to talk about the role of the Book of Mormon in conversion, and I would like to focus my remarks on a few key points.

Now the promises of the Book of Mormon are many. I'm sure if I asked everyone here, the majority would mention Moroni's promise, which tells us that with sincere desire and honest prayer, we can know of the truthfulness of the Book of Mormon. That is a wonderful promise, and one that I hope we are using everyday, but let's talk about some others.

Let's start in Alma. Alma chapter 32 is a famous chapter for the prophet's discourse on faith, given to the humble people who had been sent away from the synagogues of the Zoramites. At this point they are about as low as they think they can get. But in the middle of Alma's speech on faith, he reminds them that sometimes being low is a good thing. Starting in verse 13 it reads,

In these few short verses, Alma has given us a very large promise here. "Whosoever repenteth shall find mercy, and he that findeth mercy and endureth to the end the same shall be saved." This promise, though extended to people not of our faith, certainly applies to us as well.  If we humble ourselves and repent, mercy will be ours, and through mercy and endurance, eternal life.

My other example comes from Nephi, the first author in the Book of Mormon. In first Nephi chapter seven, Nephi's brothers are having a hard time being diligent, again. Verses 12 and 13 contain the promise he gives to them in this instance.

Nephi's promise was simple. We shall obtain the land of promise. And guess what? They do! But the problems don't end there. In chapter 16, Nephi breaks a bow, and his family is without food. At this point even the prophet is murmuring because of affliction, but Nephi remembers the first promise I talked about, and the promise he gave his own brothers a little bit earlier. The Lord is able to do all things according to his will, for the children of men, if it so be that they exercise faith in him. So he does, builds a new bow, and asks his dad where to go for food. Lehi sees the faith of his son, and applies the promise from Alma 32 and humbles and repents of his murmuring, and for a time, all is well in the promised land.

My second point is simple. The key purposes of the Book of Mormon, and how they help in conversion. To start though, we need to define conversion. Most people talk about the term conversion as a one step process. You believe the church is true? Great, we will fill up the font, you change into white, and boom. Conversion. As wonderful as those things are, conversion is more than that. It's also not just something for people outside the church. Conversion is an ongoing process. I have found several definitions of conversion, but for today's purposes, the Oxford American dictionary had my favorite.  Speaking of conversion from a Christian perspective, it defined it as, "repentance and change to a godly life, or a turning of sinners to god." Pretty powerful stuff no? Keep that in mind as I go over some key purposes of the Book of Mormon.

One key purpose of the book is that it answers questions of the soul in ways that no other book can. I have yet to find an encyclopedia with answers to things like, "How can I avoid sin?" Or "What is the purpose of life?", but I testify to you that the Book of Mormon has those answers. It answers these questions and so many more. As we answer these questions, we feel a longing for something more.  Something beyond this mortal existence. This is the feeling that brings us closer to God. This is the process by which true conversion happens.

The Book of Mormon is also a support for our church and the associated doctrines. It has been said before that the Book of Mormon is the keystone of our religion, and if we were to take it away, there would be nothing left of our religion. For those who aren't masons, myself included, lets talk about keystones for a second. Quoting from Preach my Gospel, here is a basic explanation about keystones.

"An arch is a strong architectural structure made from wedge-shaped pieces that lean against each other.  The middle piece, or keystone, is usually larger than the other wedges and locks the other stones in place. When Joseph Smith called the Book of Mormon “the keystone of our religion,” he taught that the Book of Mormon holds our religion together."

As the keystone, it serves a very important purpose. With one hundred percent accuracy it proves the truth or fraud of the prophets and church as a whole. The words of Elder F. Burton Howard when talking about the first vision of Joseph Smith can be directly applied to the Book of Mormon as well. He said simply,

"Either it is true, or it isn’t. If it is, it is the greatest message in all the world. Even someone who didn’t believe it could not pass by it without being profoundly affected.”

Now brothers and sisters, we are all here because at one point or another, we decided we believe in the Book of Mormon. My question today is the same as Alma to the saints in Zarahemla. "if ye have experienced a change of heart, and if ye have felt to sing the song of redeeming love, I would ask, can ye feel so now?" Have we been profoundly affected? The Book of Mormon helps us determine for ourselves one way or the other if this church is true. This is God's way to letting us gain proof of his teachings. The rest of the church depends on the truth contained in the book.

The simplest promise of the Book of Mormon comes from the prophet Joseph Smith himself. He said,

"I told the brethren that the Book of Mormon was the most correct of any book on earth, and the keystone of our religion, and a man could get nearer to God by abiding by it's precepts than by any other book."

I would like to conclude with a story from the Ensign.

As members of the Church, we talk about missionary work often. But it is exciting when we actually get to go beyond the talking and have a chance to be a missionary.

With an 11-hour flight ahead of us, we introduced ourselves and started a casual conversation: who we were, where we had been traveling, where we lived, and so on. It was the “where we lived” part that seemed to pique Paul’s curiosity. When he discovered that both my friend and I lived in Utah, within minutes of Brigham Young University, he immediately asked if we were Mormon. Our response was an enthusiastic “Yes!”

He then asked, “Are you Christians?” We quickly said that we were. We told Paul that the name of the Church, The Church of Jesus Christ of Latter-day Saints, should be solid proof that we are, indeed, Christians. After a lengthy discussion about how many of our beliefs were similar to other Christian denominations, my friend and I leaned back in our seats, satisfied that we had enjoyed a successful missionary moment.

Knowing that lunch would be served soon, I got up to stretch my legs.  It was then that I thought that what we had shared with Paul, though nice, was not all that we needed to share. We were so worried about making sure he knew the similarities between our Church and others that we spent the time convincing him that Latter-day Saints were not so different. I had completely neglected to tell him what makes our Church so extraordinarily different. As I returned to my seat, I resolved to finish our discussion as it should have been finished.

I sat down, leaned over my friend (who was in the middle seat), and said, “Paul, there are a couple of other things you should know. Jesus Christ is most certainly my Lord and Savior, and He is the very center of the church we belong to. However, I neglected to tell you some other important details.”

We talked about Joseph Smith and the First Vision. We discussed the Book of Mormon, the restoration of the priesthood, and other important teachings of the gospel. As we talked, I silently uttered a prayer that we could say the right things. It was a great experience to discuss the fundamental aspects of The Church of Jesus Christ of Latter-day Saints--the parts that make our beliefs so unique. It felt good to share not only my love for the Savior but also my testimony of the Restoration of His gospel. As frightening as it seemed at moments, sharing the gospel with Paul was tremendously rewarding.

I know the Book of Mormon has changed my life, and it can change all of yours, and it can be the driving force in your own personal conversion. I love you all, and The Lord loves you all. Have a great week.

First picture is our well coordinated district last week for Chi-ball.  For anyone interested, Chi-ball is basically softball with no gloves, very few rules, and a basic attitude of ruthlessness. It's a beautiful thing.

Picture two is a group shot of both zones who came to play. It was quite the turn out.

And number three is my good friend Santa here. Turns out, even though it's June, (woah. It's June already, and almost over. Crazy.) that Santa Claus is still hanging out around Chicago. Guess I found his summer home. 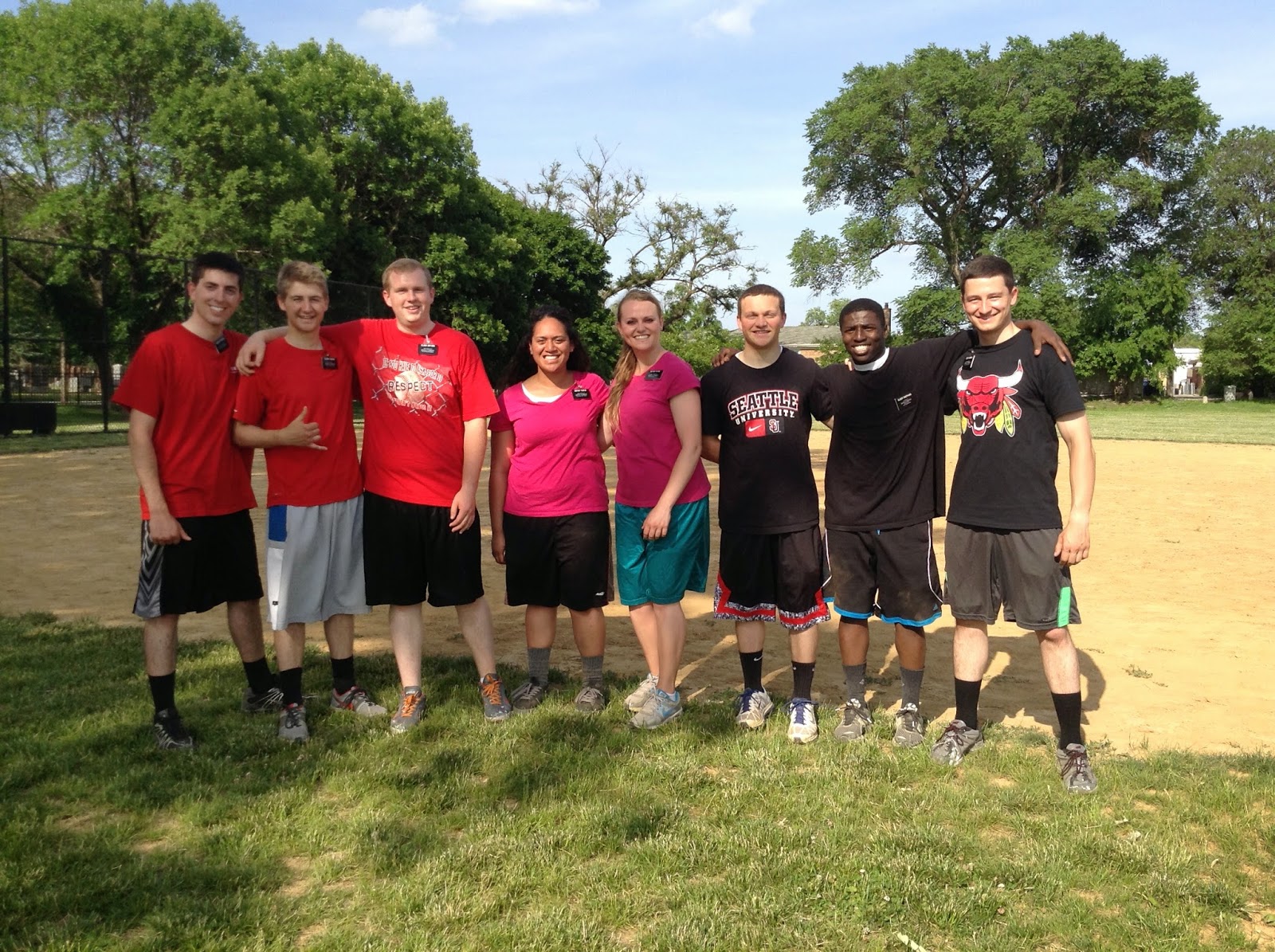 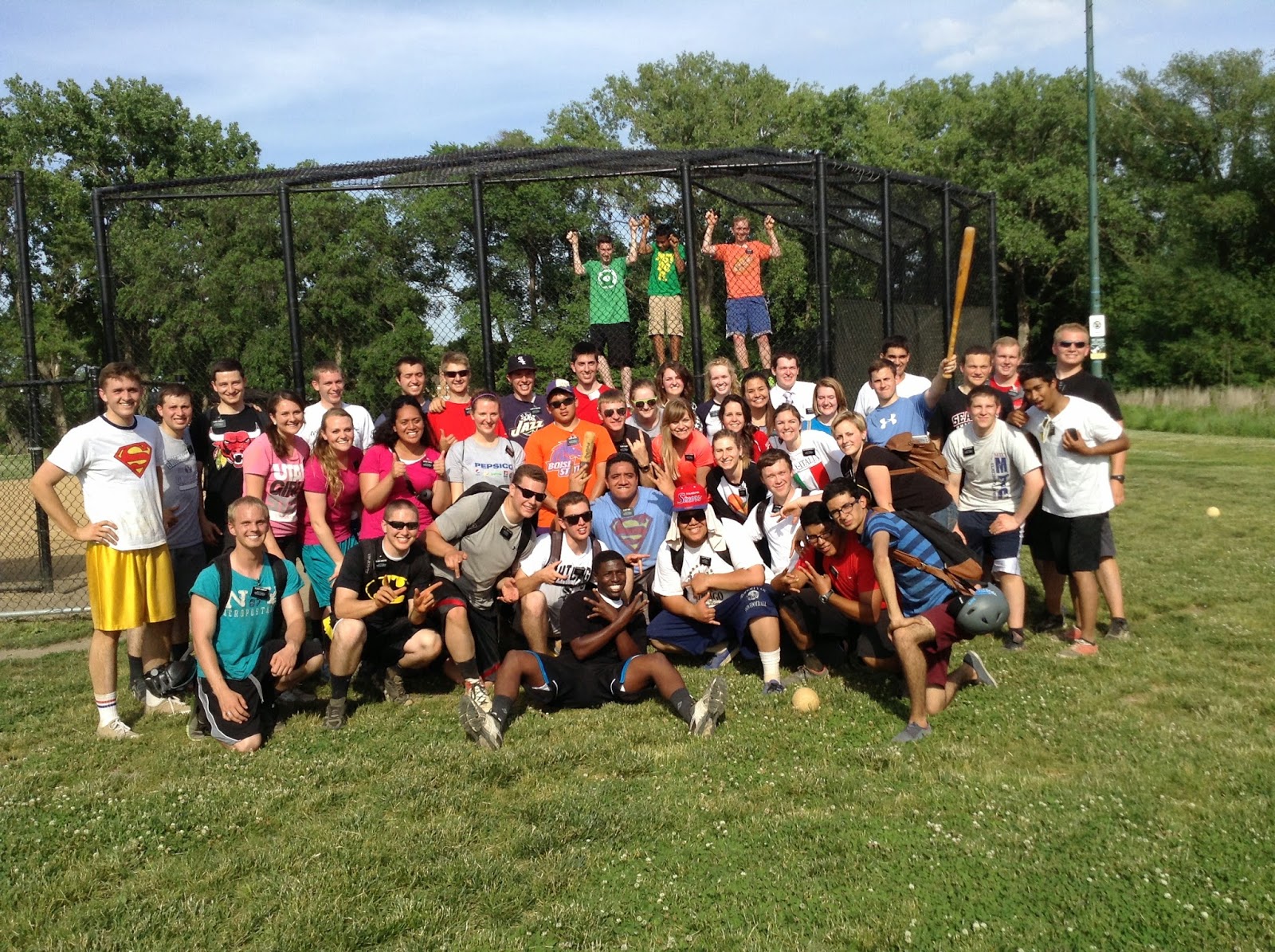 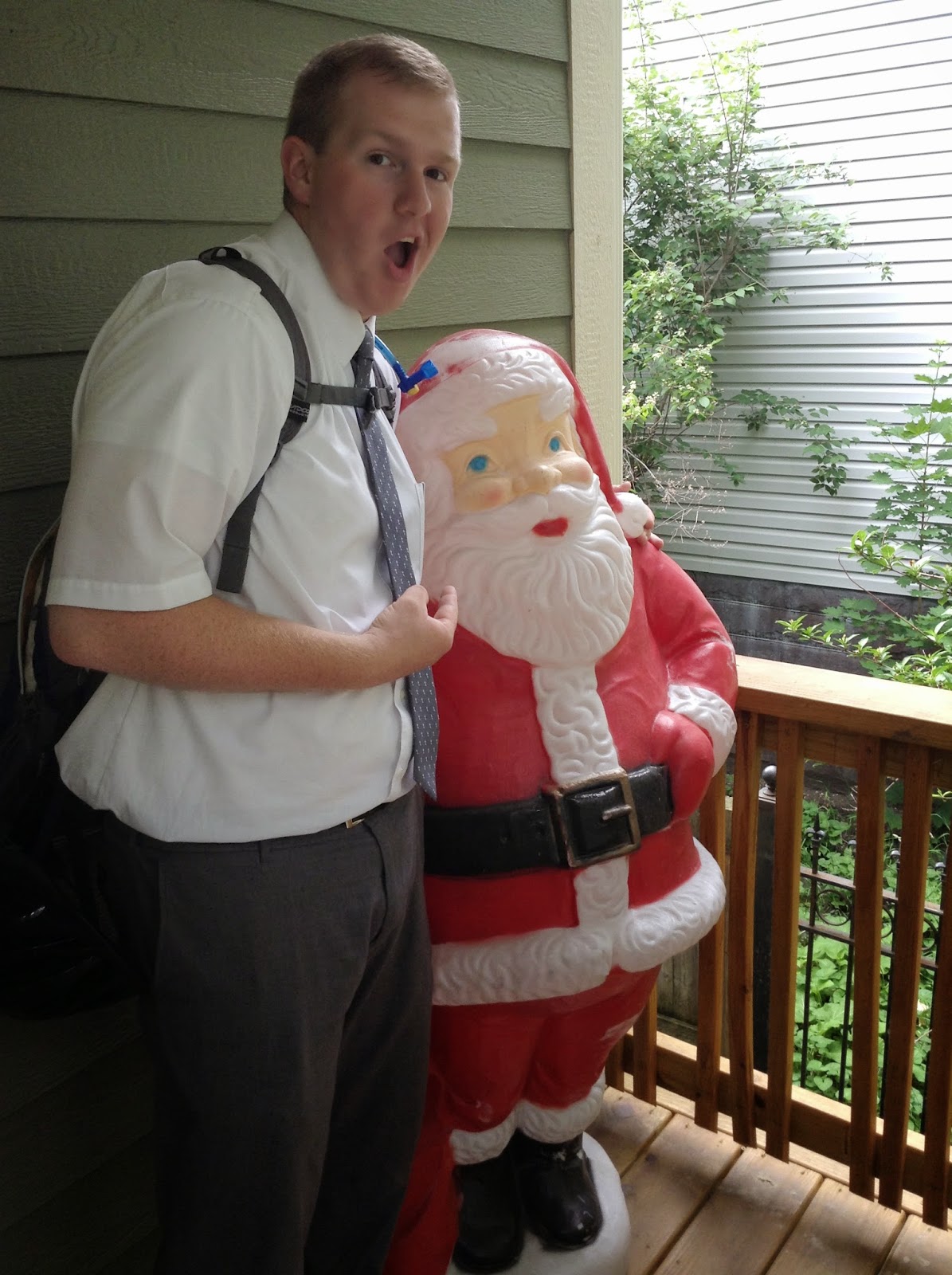 Posted by Logan Gifford at 5:39 PM